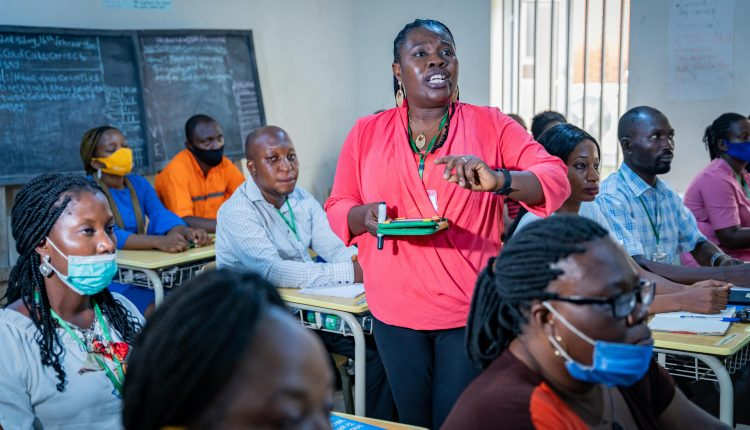 Imasabor Primary School is located in the small, sleepy town of Ologbo, 54 kilometres from Benin City, Edo State. The school is not big because it caters for a small population, but it attracts several pupils aged between 3 and 11 who are taught the full basic education curriculum in readiness for higher studies.

Though isolated from any major conurbation, Imasobor Primary School teachers are connected to a network of over 15,000 teachers spread across 1,228 government-owned primary and junior secondary schools (referred to as EdoBEST schools) in Edo state. The teachers use a methodology that was recently confirmed as premium by a study conducted in Bridge Kenya Schools.

Based on data collected over a two-year period from Bridge Kenya schools, Nobel Prize-winning economist, Professor Michael Kremer, and his team made up of four other researchers concluded that the method used by Bridge Kenya Schools is delivering better learning outcomes than traditional methods.

The study shows that “for early childhood development – typically 3 to 5-year-olds – children [in Bridge Kenya Schools] gain nearly an additional year and half of learning, learning in two years what students in other schools learn in three and a half years.

The study also showed that children in other age cadres in Bridge Kenya schools also recorded similar improvements in learning gains compared to their counterparts in other schools.

The researchers have noted that if replicated at scale across public education systems, the gains would be enough to put African children from underserved communities on track to match their peers in countries with incomes three or four times higher.

The evidence on ground at Imasabor Primary School corroborate the findings and thinking of Professor Kremer and his team. “After we were trained in this methodology, the setting of our classrooms changed,” says Godwin Ogbole a 28-year-old teacher.

Godwin who was engaged as an EdoSTAR teacher (a new fellowship instituted by Governor Godwin Obaseki to raise a new crop of teachers for Edo state) had used traditional methods for five years before being inducted into EdoBEST. “This method reduces pressure on our teachers,” he says with a smile. “As part of the benefits, teachers have more time to do research and it reflects on the way they work with their pupils. The pupils are also better because they are happier with tactics for lesson delivery and motivation.”

When teachers arrive at school, they clock in using their tablets:  there is no room for manipulating arrival time since all data is sent directly to a database.

Specific lessons are also sent to each teacher via their tablets which cancels out the challenge of unavailability of textbooks for teachers or lesson notes. Each lesson is timed based on experience (and evidence from the field), and the lesson completion rate is tracked to ensure that all teachers are teaching in school.

Teachers who are absent or do not teach are easily identified and counselled on ways to do better. If they have challenges, solutions are proffered and implemented.

With the new method, education managers at the Edo State Universal Basic Education Board (Edo SUBEB) can determine teachers and pupils who need support since all records can easily be accessed and evaluated against stated objectives.

“The very fact that someone is watching your performance is an incentive to do better,” says David. “Because we are aware that the technology on which this method runs can show what we are doing makes all of us sit up. Additionally, Learning and Development Officers, as well as Quality Assurance Officers, visit our schools randomly to ensure that we are upholding standards and putting the pupils at the centre of everything we are doing.”

The major distinction of the methodology is the way pupils are managed on their academic journeys.

“We discovered that even the slow learners are becoming fast learners. In the past, some children were afraid of school, but the story has changed,” says David.

At present, over 200 field officers are ensuring that EdoBEST continues to be implemented across Edo state-government-owned schools. The programme caters to the learning needs of over 300,000 children while the World Bank continues to provide support.

Professor Kremer who led the team of researchers in Kenya notes that the methodology delivers highly standardized education that “… has the potential to produce dramatic learning gains at scale, suggesting that policymakers may wish to explore the incorporation of standardization (including standardized lesson plans and teacher feedback and monitoring) in their own systems.”

Most teachers and pupils confirm that EdoBEST which was introduced by Governor Obaseki is a game-changer in the education sector. “Now I enjoy teaching,” says Godwin as he waves his teacher tablet concealed in a bright green pouch.